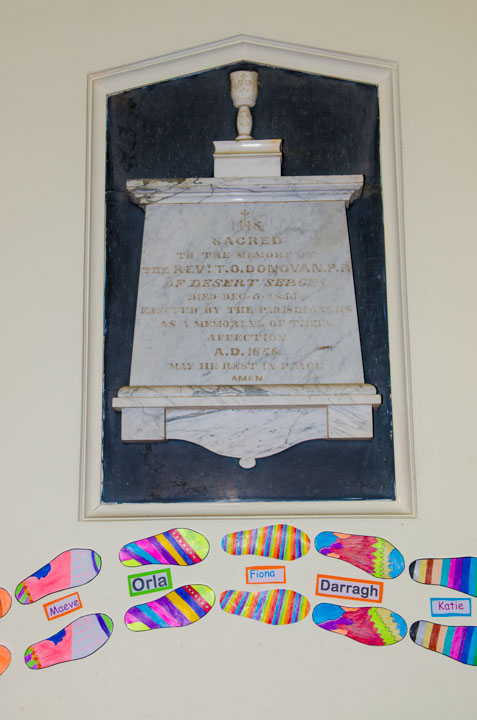 The year of Fr. Ó Súileabháin’s death (1858) is important also because it was the year that Our Lady appeared to St Bernadette in Lourdes. Fr Denis O’Donoghue was succeeded in the parish by Fr Daniel Coveney who during his studies for the priesthood in Rome had developed a special devotion to Our Lady so it’s no surprise that he dedicated the new parish church to the Immaculate Conception of Our Lady — words used by Our Lady at Lourdes to tell Bernadette who she was!

Meanwhile, in the same year, in a poor post-Famine Dublin, a relatively young (58) but brilliant sculptor died. John Hogan grew up in Cork and received his first commercial commission from Bishop John Murphy to carve statues for the North Cathedral.

In the 1840s, while still in Rome, he carved several works which treat of the death of Christ and these were installed in churches and convents across Ireland and Canada. One of them is now the centre- piece of the sanctuary in Castletown Kinneigh Church. Hogan died 160 years ago this year. 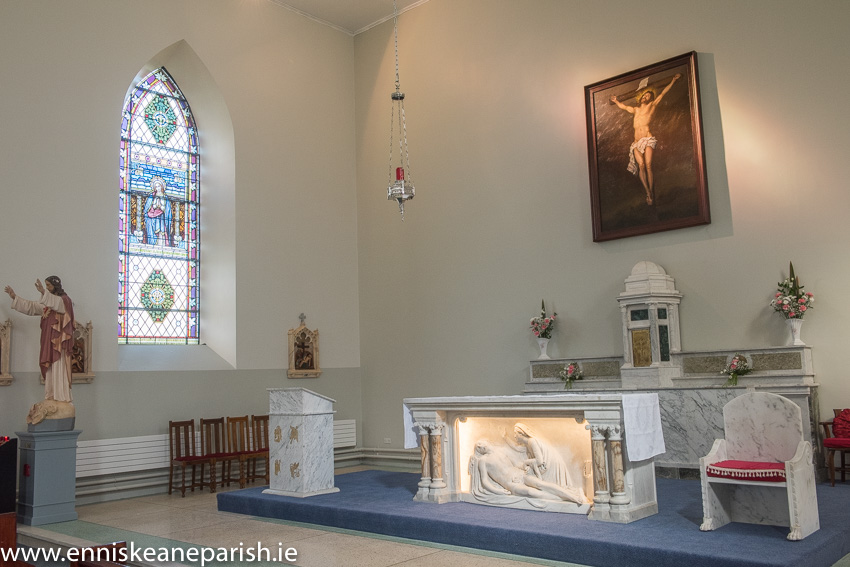 The sun that shone brightly all day has gone down - and soon these boys and girls will be falling down too!
Congratulations to the children from St. Mary's School, Enniskeane and from Ballymoney NS who received their First Holy Communion today in Enniskeane Church.
May the light of Christ be with them all the days of their lives. ... See More / níos móSee Less

Congratulations to all the boys & girls making their FC today, may God bless them in their lives ahead. xx

God Bless all the girls and boys who receive their First Holy Communion today. 🙏🙏

My grandfather Timothy Deasy was from Desert Ahiohill . He was very devout.🙏

Beautiful Ceremony Fr Tom Well done to all: Children, Teachers and The Children’s Families. Choir and Church Music. Have a wonderful day all.

The organ was restored a few years ago, one pipe was in his name, Timothy Deasy. 🙏

Congratulations 👏 to all the Boys and Girls may Our Dear Heavenly Mother and her son Jesus watch over them all the Days of Their Lives .Amen..

Congratulations to all the boys & girls on your First Communion. It’s a very special day for you & your family. Keep safe🌞

Best wishes everyone ❤️ have a fab day. and to my niece aisling .

Congratulations to everybody. Such a special day x

Congratulations to Eric Buttimer on his first holy communion💕

Have a lovely day Conor Keohane and all ur friends xx

God Bless all the Children

Thank you Fr for the lovely mass 🙏🏻🙏🏻

Best wishes to Jack Dineen on his first holy communion

Congratulations to all the boys and girls today

The sun is out! And for tomorrow, too, as the first group of boys and girls receive Jesus in Holy Communion for their first time.
Enniskeane Church is ready to welcome the boys and girls and their parents and teachers to this special Mass on Saturday at 11am.
It will be live streamed on this page so everyone is welcome to pray along with them.
It is a pity that everyone who wants to can't be in the church due to Covid19 restrictions. The rule for churches is that the limit is 50 people. But where we can social distance and create extra space between these and create another pod of up to 50 people, we can accommodate more than 50.
Each child with their parents has a designated pew. The pew in front and behind has to be empty. So our church can only hold two pods of 50 max in the body of the church.
This limits us to 84 places for the children and their parents and then add in teachers, musician.
The Mass will be live streamed so share this link Enniskeane Parish
Many thanks to everyone who has helped prepare for this sacred day. May the children be blessed tomorrow and every day of their lives. ... See More / níos móSee Less

God Bless and Protect all the Boys and Girls who will receive 🙏 🙌 their First Holy 🙏 🙌 Communion on Saturday twenty sixth 🙏 🙌 hope The Sun shines .Amen 🙏 🙏.

Really sad we can’t all celebrate together but at least the day will be celebrated ! Best wishes to all for a great day !

Bless these children and their families!

Congratulations to you all, hope you all have a wonderful day 🙏

God Bless all the boys and girls tomorrow. 🙏

May God bless all the children, parents & catechists

Have a lovely day