With sadness and thanksgiving to Almighty God, we mourn the death of Fr. Sean McCarthy, retired Parish Priest of Enniskeane and Desertserges, who died this morning. 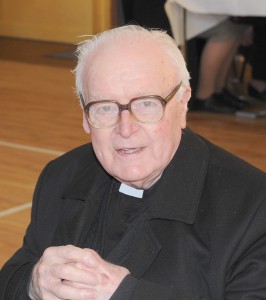 We will prayerfully welcome Fr. Sean’s remains back to Enniskeane Church this evening (Monday) at 8.30pm, where he will repose until 10pm.
Our sympathies also go to his two sisters and brother-in-law, his nephews and nieces and their families, his classmates, his housekeeper and carers and friends.
A native of Bantry, Fr. Sean was ordained a priest in 1949 at St. Patrick’s College, Maynooth. After serving for a time in the US, his first appointments in Cork were in the city centre and he then moved to Crosshaven as curate in 1960. This was followed by a term as Chaplain to Our Lady’s Hospital until in 1967 when he was appointed curate in Passage West where he served until 1972 when he returned to the city to serve as curate in the South Parish. In 1980 he moved to Turner’s Cross where he was curate until 1983.
On 22nd of June, 1983, Fr. Sean began a long association with Enniskeane & Desertserges Parish when he was appointed its Parish Priest. This link has lasted more than 32 years. And this is also where he wished to be laid to rest.
After serving as Parish Priest for 17 years, Fr. Sean retired as PP in July 2000 but continued to serve officially as Assistant Priest until 2005. Since then, he continued to assist periodically and maintained his interest in and prayers for all the people whom he has known and cared about here.
May he now rest in the eternal peace of the Lord whom he served.